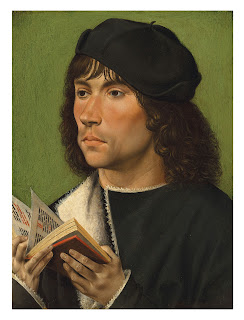 It's all change at the auctions-formerly-know-as-old-master this summer. Coronavirus has kept the crowds away, and the auction houses are restructuring. Christie's has combined fine and decorative arts from old master to nineteenth century. Sotheby's has combined old master to contemporary. They say clients don't care about categories; I say accountants care about cost cutting. Merging departments reduces overhead. The old master offerings seem a bit thinner than usual, but Covid doesn't seem to have scared away consignments.

The Burgundian portrait, above, was the stand-out picture for me. It's a powerful portrait with a spectacular provenance, once owned by Robert Walpole and now being sold by the Earl of Derby at Christie's. Estimate is just £400k-£600k. Some people don't like the tiny hands, but I think they're missing the point. Portraits were stylised, and relatively small hands can be seen on many unquestioned masterpieces from the period, better to focus on the face. The catalogue entry rightly draws parallel with Van Eyck.

There are other features that bother me, though. The infra-red image in the catalogue shows a radically different picture in the underdrawing, with the hair and contours of the face looking very different. UV light reveals some scattered retouching in the neck, visible in the infra-red, but not much else. It might be because it's in perfect condition and the artist just changed his mind, or it might be that the picture was much more fundamentally re-painted later. I've requested but not yet received the Christie's condition report. I love the image, but I'm nervous about what's under that varnish.