Museums are not the answer for Confederate monuments 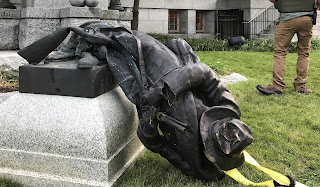 Confederate monuments celebrate a failed war to defend slavery. Most were erected long after the Civil War as a deliberate assertion of white supremacy, alongside Jim Crow laws and a resurgent Ku Klux Klan. Other historical figures have flaws against the standards of our times, but statues of Washington and Jefferson celebrate their enlightened nation-building, not their slave ownership. I understand why so many think the statues must go. I'm still not persuaded. People really are worried about a slippery slope that will carry away all historic statues. They're not racists, and they're not fools. Radicals really are targeting Columbus now.

But this debate isn't really about the merits of Confederate monuments, and I don't think the statue smashers' primary concern is racism. In a recent poll a plurality of African Americans want the statues to remain. That's especially awkward for protesters who believe we should defer to minority experience, so they've mostly ignored it. The inflamed passions are really a manifestation of the culture wars. The most angry voices and most sanctimonious arguments are from the people who most strongly identify with one or other tribe in the culture wars. They're animated by hatred for the other side in the here and now, not racism. It's telling that the debate over symbols has been so much more gripping and more inspiring than policy debates about issues like gerrymandering or civil forfeiture or policing that have much more real-world impact here and now.

Any solution that doesn't recognise that will fail. The task isn't deciding what to do with statues, it's working out how to pacify culture warriors. And that's why I think some of the 'middle ground' solutions are the worst of all worlds.

Putting the statues in museums assumes that museums will give the 'right' interpretation, so that the oiks who won't 'get it' in the public square can be made to understand. It co-opts museums for a particular side in the culture war. Sorting institutions into 'ours' and 'theirs' is a catastrophic strategy. Museums already tend to lean liberal. Many were founded as patriotic projects, but today they're more likely to indulge the cringing political correctness of Fred Wilson. Putting the sculptures in museums won't calm the passions. It will shift the focus to museums, further politicising them and alienating a large section of the public.

Adding new statues of heroes that today's critics approve is also a problem. They are bound to be a focus of bitter debate when the symbolism is raised to such importance. Maybe they could raise statues of Frederick Douglass holding a rifle, to show his support for gun rights? And it feels condescending to require a statue of a black hero directly opposite a Confederate criminal to provide 'balance'. A non-trivial problem is that a lot of public sculpture is quite awful, and bad monuments have proliferated in the UK and sullied our towns and cities.

I don't have any better ideas. I think it's tragic that iconoclasm has become a radical strategy, and also tragic that so many conservatives struggle to concede the awfulness of the Confederacy. But anything that reinforces destructive tribal loyalties in the culture wars will make things worse.