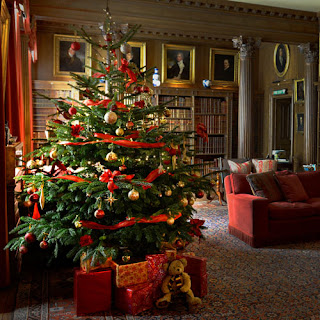 I hear there were some expensive things at recent contemporary sales, but I don't pay much attention to such vulgarities. The real action is at the Old Master auctions. They were queuing around the block last month at Christie's to see something from the contemporary sale, but few people visit the free, public views for the old master auctions.

I've always wanted to see a version of Titian's St Margaret that's in a lot of the Titian catalogues, listed as in the Kisters Collection, Kreuzlingen. Kisters pictures have been coming onto the market over the past few years, and the one I'd wanted to see is on preview at Sotheby's this week, ahead of its sale in New York in January. Alas, I was disappointed. There are flashes of brilliance, but it's got nothing on the Prado version. Rightly attributed to 'Titian and studio', the estimate of $2-3m tells you how much Titian is in it. Very rich people can bid anything to the sky if the both want it, and this might just attract the attention of gazillionaires. But $3m or so is a prudent estimate and a fair price for a big and striking picture with a bit of Titian in it.

Another Kisters picture is much more exciting: a Velazquez I didn't know at all! It's a collaboration with Pietro Martire Neri, but the face looks all Velazquez. Estimate is $3-4m, which seems cheap for just the face. You get the rest gratis. There's also a gorgeous double portrait attributed to Bartholomäus Zeitblom (surely too good for school, and who else?), and a Virgin and Child with St Anne by Holbein the Elder coming up in New York. Wowsers!

Winter 2017 is the Northern Renaissance season, largely thanks to the Kreuzlingen collection. Other than Cranach, these guys don't come to market often enough to estimate reliably. They're not especially fashionable, and for reasons I can't fathom museums don't generally buy them. In the past few decades the Getty has bought a few, the National Gallery in Washington has bought a wonderful Calvary by the wonderfully-named 'Master of the Death of St Nicholas of Münster' and UK museums have bought ... nichts. I shudder to think of what they could have had for the cost of all those British portraits. 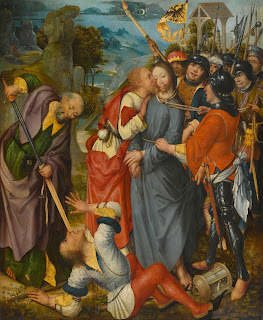 This Betrayal of Christ is by an unknown master from the Lower Rhine, c. 1510-15. It's an exceptional and beautiful picture that is worthy of the National Gallery, estimated at £200k-£300k at Sotheby's. Lack of comparisons makes estimating it difficult, and good Northern pictures have tended to sell strongly recently. But for 'relative value' in the old master world, this is my pick. Tremendous quality, with such characterful figures. 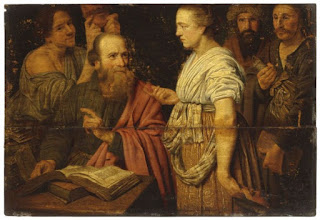 Another potential bargain is a panel that might be by Van der Vliet at Christie's, which needs attention. I don't know the artist well enough to judge, but the quality looks high. A much larger version sold for a lot of money a few years ago. Rohan McCulloch pointed out on Twitter that this one made £5k at a regional auction not long ago, against a low estimate. It's interesting that the buyer flipped it to a major auction house without restoring it. That might mean that the buyer couldn't get an expert endorsement (seducing experts is a crucial skill in the art market). I think it's more likely that the buyer thought it the best way to maximise risk-adjusted return. Dealers are keen to buy 'sleepers', because it makes them look smart and the re-sale price won't be anchored by the auction price. The £12k-18k estimate is way too low if it's right. But cleaning it is a cost and a risk; it might not be as good as it seems, and it might not be accepted. Even if it is, there's a risk that the right buyers aren't there on the day, and trade buyers won't pay full price for a fully-authenticated work. If I were a cynic, I'd be tempted to under-attribute and tip off potential buyers as a deliberate marketing strategy. 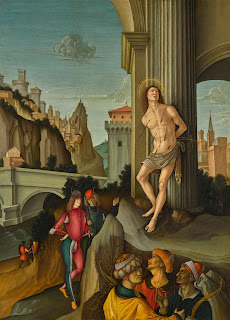 Speaking of cynical marketing strategy, I wonder if this picture would sell better as three or four fragments. The catalogue entry says it's a clever exercise in distorted perspective, but I don't think the composition works. In real life it looks much better than the photo. I'm entranced by the details, like a camp proto-mannerist take on Andrea Mantegna. It's by the Master of the Figdor St Eustache, £300k-£400k at Sotheby's. 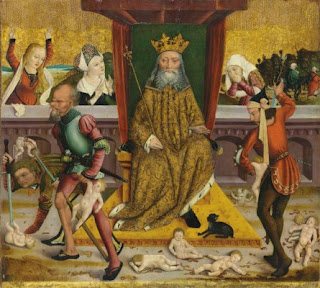 My favourite Christie's picture is early German, too. This Massacre of the Innocents is by the Master of the Dinkensbühl Altarpiece, another wonderful moniker (beaten only by the Master of the Kitten). Wonderfully theatrical characterisation of calculated thuggery overseen by a sociopathically impassive king, wicked dog, and distraught mothers. Estimate is just £400-£600k, which is surely within the reach of many museums. Christie's also has an exciting rediscovery: a rare picture by the Prague mannerist Bartholomäus Spranger, Mercury carrying Psyche to Mount Olympus (£400k-£600k). Tragically it's rather abraded, like so many of his pictures that were presumably looted during the Thirty Years' War. It's still a rare and important picture that would be a fine acquisition by a major museum like the Met or the National Gallery in Washington, representing a school of art that bloomed brightly but briefly. 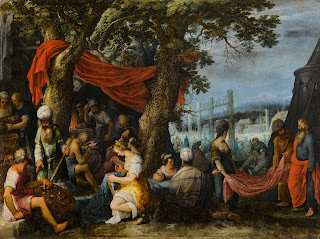 As ever, there are eye-watering gems in the sub-£100k range, which barely buys a snotty handkerchief by the trendy contemporaries. Adriaen van Stalbemt will never be a household name, but this picture of The building of the Tabernacle with the Israelites sewing the curtains was good enough to be included as an Elsheimer in an old catalogue raisonné. It had been downgraded by 1977, when it sold for about £65k in inflation-adjusted terms. In 1977 inflation was nearly 16%, income tax was 83% above £20k and globalisation hadn't begun. Today it's estimated at £60k-£80k.

I'm not a great admirer of Victorian pictures, but this Landseer sketch is gorgeous, at £50k-£70k. I wish I knew more about sculpture. There seems to be a gap in the mid-market, with wealthy collectors paying millions for the very best, but bargains in the low-five-figure range. Sotheby's is previewing a tremendous collection of drawings including a Fra Bartolommeo landscape from the album sold in the 1950s and a couple of Watteaus. They're being sold in New York in January, and I'll say more about them then. In the meantime, I'm off to buy some lottery tickets.

Posted by Michael Savage at 12:56 No comments: