Sotheby's and Christie's dominate high-end art auctions, but Bonham's has some particularly interesting pictures this month. There are no multi-million pound masterpieces, but some good and intriguing mid-range pictures with enticing estimates. My favourite is a full-size contemporary copy of Poussin's The Israelites Crossing the Red Sea that they attribute to Le Brun. Not quite an original work of art, but the £25k-£35k estimate is maybe a hundred times less than what a Le Brun of this scale and quality might fetch, and a thousand times less than a Poussin. It's worth £25k just for the 1830s Smith & Son frame. 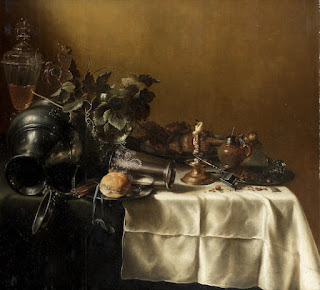 This Dutch still life is a bit of a problem picture. It's attributed to Pieter Claesz, although some scholars favour the much less esteemed Hendrick van Heemskirk. The odd thing is that the left hand part seems very high quality, but other elements are quite slovenly. It's a union of a £200k-£300k picture with a £2k-£3k picture. They compromised with an estimate of £20k-£30k. You just need to spend the savings on a tapestry to hide the bad bits. 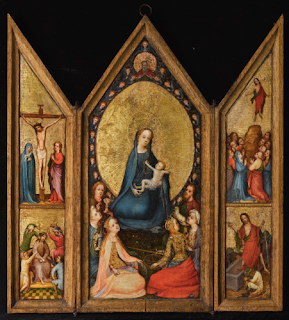 The highlight of this season is a picture I've wanted to see for a very long time: a masterpiece by the Master of St Veronica, an anonymous but enormously talented early Cologne artist. It's the best thing in the London sales, both very rare and imporant and very beautiful and moving. I love the idiosyncrasy of early German art, the jovial Christ delighted by his resurrection, transcendence made imminent. The estimate of £1.2m - £1.8m seems paltry. It's not the most 'commercial' picture, and the central figures are a bit abraded, but that's still very little for something so fabulous. It represents an imporant moment in art history that's poorly represented in many museums. The National Gallery ought to go for it, but I don't believe they will. The Getty and the Met are obvious contenders, plus maybe Cleveland or the Louvre. It's been widely published and known about, and it's an obvious gap in many collections. Museums should be ready to pounce, and I'm surprised a sale wasn't brokered before the auction. A £1.8m low estimate disrespects the artist's genius; isn't it enough that we've forgotten the poor chap's name? I really hope that later this week we'll hear that it's gone to a great museum.

Sotheby's also has a glorious early Jan Brueghel the elder (£1.8m-£2.5m; really nice little picture, but this shouldn't be more expensive than the Master of St Veronica!), a Rembrandt Head of Christ (£6m-£8m) and an interesting pair of pictures of beggars by Giordiano (£150k-£200k). 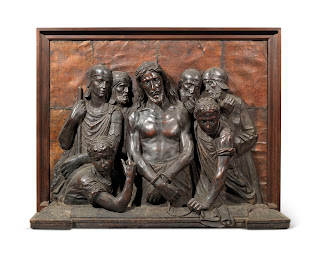 The best things aren't always the most valuable, and one of my favourites at Christie's is this Ecce Homo, vaguely described as 'Italo-Flemish seventeenth century', which is a technical art history term for "we're not quite sure". I don't know either, but I love it. It needs to be seen from below, the figures looking down at us. It's a very Roman image, reminiscent of Mantegna more than Flemish art. If I had space I'd certainly be bidding against the enticing estimate of just £5k-£8k. 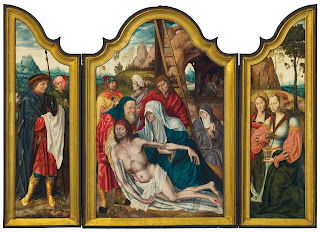 Christie's has the Eric Albada Jelgersma collection of mainly Dutch and Flemish pictures. He had some fine pictures, but his taste is not mine. More appealing to me is this Antwerp school Lamentation with an unusually horrific scalped Christ (£250k-£350k). A lot of similar pictures were painted in Antwerp, and the quality is often really good. But I wonder how many people would want to live with that rather harrowing image. More conventionally popular is a magnificent English-period Van Dyck of a beautiful young Princess Mary (£5m-£8m). Another version is at Sotheby's, given to Van Dyck and studio, but not a patch on the Christie's masterpiece. 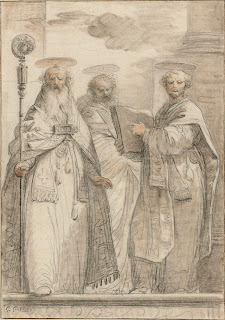 The other highlight of the season is a sale from Rugby school, which is all much to my taste. The old master drawings include some artists I especially like: Orsi, Cades, Testa, plus a rare Lucas van Leyden, a Correggio and a superb Jan Brueghel the elder. Giuseppe Cades is an eighteenth century Italian draughtsman who deserves to be better known. Three Bishop Saints above is estimated at £15k-£25k.

Posted by Michael Savage at 11:28 No comments: