'Michelangelo & Sebastiano' at the National Gallery 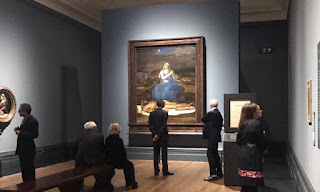 In the early Judgment of Solomon you get a sense of Sebastiano's soaring ambition, a large complex composition that he couldn’t quite resolve and abandoned unfinished. His encounter with Michelangelo in Rome was fortuitous. Sebastiano got compositional ideas from Michelangelo, Michelangelo got his ideals taken forward in the intensely competitive marketplace that Raphael was starting to dominate.

The mix of sublime masterpieces and sometimes faltering trials is compelling. Sometimes you get both together. The Viterbo Pieta (top) is an inventive and moving masterpiece, but who can believe in that masculine mother? A friend said you expect chest hairs to sprout from her robe. The walnut frame was specially made for the exhibition by the National Gallery's Head of Framing, Peter Schade. He also made the new and spectacular frame for the NG's 'first' picture, the great Raising of Lazarus, below in its new frame. 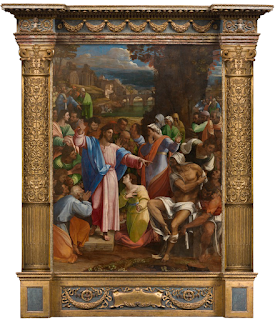 For me the sculptures were the high point and the low point. The plaster cast of Michelangelo's Pieta gives a better feeling for it than the original in Rome, hidden behind inches of glass. The two versions of The Risen Christ, one a cast, are intensely moving, and seen together with Michelangelo's drawings is an unforgettably powerful visual experience. The low point is seeing the Royal Academy's Taddei Tondo imprisoned in a box (below). It's an utterly unsympathetic and depressing display. Better if it weren't there at all. 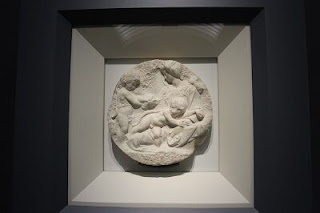 The selection and display is surprising. Artists' letters are interesting for content rather than form, but this show includes original missives taking space that could have been given to drawings. Sebastiano's portraits have least connection to Michelangelo, but there are some fine examples included. It's wonderful to see them, and the Clement VII is a masterpiece, but they confuse the focus of the exhibition. Worst of all, the National Gallery has been hornswoggled into showing  a purported portrait of Michelangelo that might be an outright fake. It's a recent attribution shown as 'Probably by Sebastiano' (what's wrong with the word 'attributed'?). The condition is poor, and so is the anatomy. There's a better Sebastiano on loan from Longford Castle in the main galleries, in a little focus exhibition of works related to the exhibition. Discoveries seem new and exciting, but selection should be driven by quality rather than celebrity.

Both artists benefited from collaboration, which this exhibition shows brilliantly. But who can stand comparison to a genius like Michelangelo? Inevitably Sebastiano is diminished by juxtaposition. Sebastiano was a wonderful draughtsman, but he seems almost feeble set against some of Michelangelo’s greatest hits. A show that ought to have rehabilitated Sebastiano has pushed him further into the shadows. And that is my main reservation about this exhibition. Conceiving of the show as ‘Michelangelo & Sebastiano’ keys into our worst expectations of exhibitions: ‘unmissable’ blockbuster (‘Michelangelo – so famous he was even a Ninja Turtle!), or else as competition (who’s the best? As if that could be in doubt).

If you know anything about Sebastiano, it's that he was Michelangelo's ally against Raphael. I just wish the exhibition had been oriented more explicitly to the wider context. La Madonna del Velo is an obvious response to Raphael, as the catalogue notes, and the portraits seem indebted to Raphael too. It wasn't simply a time of Renaissance rivalry. Personal rivalries make compelling stories, but in the long run the creative mix of ideas was more important. And beneath that unbelievable triad of Michelangelo, Leonardo and Raphael were dozens of lesser artists who deserve more attention. Some are distinctive and well understood, like Sebastiano, but others are still hard to isolate like Gianfrancesco Penni.

Commercial reality and cultural expectations conspire to push museums towards simple formulae. A lot of critics have failed to grasp the show, seemingly disappointed that Michelangelo is encumbered by the little guy. But museums of the National Gallery's stature ought to be able to take more risks. How wonderful it would be to see the little guys together, to see how the second tier drew on the breakthroughs of the High Renaissance and try to get closer to some of mysterious students and followers. In the meantime we just have to make the effort to appreciate Sebastiano in his own terms, as well as enjoying some of the absolute pinnacles of human culture in this show.
Posted by Michael Savage at 13:10 No comments: