It's all about context: assessing the old master market 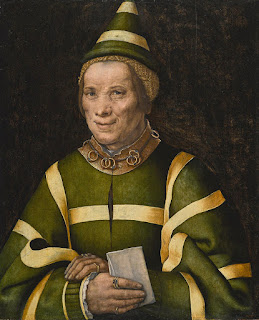 The old master auctions that I wrote about recently did ... OK. Sold percentage was high, but the major Turner that I didn't care for just squeaked by at £18.5m. Some wonderful Northern pictures did deservedly well, a portrait of Anne of Hungary's court fool (above) that they gave to Jan Sanders van Hemessen making £2.2m against an upper estimate of £600k. A marvellous Murillo made £2.7m, a little less than it made in 2005, adjusted for inflation. Conventional wisdom is that the market doesn't like 'stale' pictures, but twelve years is enough of a gap for a new generation of collectors to come through. And whilst novelty doubtless has some inherent value, there are other reasons for recent returns to do poorly at auction. The person willing to bid highest last time has dropped out - because they're selling it. The last auction established an anchor price, so it's easier to offer around the market than something with uncertain value. Auction might be the last resort. And they might be selling because it wasn't as good as they hoped, after cleaning and research. Finally the market is inherently volatile. There just aren't that many people chasing after each lot, and indeed some pictures returning to auction do very well indeed, from this to this.

Art market reports tend to read to much into each auction. It's a small sample, and it's mostly noise rather than signal. The July sales were solid, but not spectacular, so people tended to read into them what they wanted. Some old master dealers are too keen on talking up their market. Short term fluctuations are market volatility are literally their living, but sometimes being too close to the action means missing the context. Just because some dealers might be making a killing doesn't mean the market is in splendid good health. So I find myself again in disagreement with Art History News.

Supply of old masters fluctuates a bit, but not by as much as you might think. Great things do still come to market, and there’s a fairly steady stream of material. But they’re not making any more, so it is a finite market. The key change is demand. Art and antiques are bought by the affluent and the rich. And their ranks have been multiplying. There’s been a massive growth of global wealth, and a particularly striking growth in the super-rich. The potential market has been growing.

If a population increases and grows richer, a car manufacturer with static sales shouldn’t get too excited. There are more potential customers, but they’re not buying cars. If it turns out that all the other manufacturers are selling more and more cars, as you’d expect in a growing market, our manufacturer ought to get a bit worried. That's the situation in the old masters market; other sectors in the art market are booming.

Bendor Grosvenor references a lightweight report by Arts Economics. It’s hard to assess the report because there are so few references. The lack of caveats (uncertainty about size of market given different definitions and different sales channels) makes it look more like a marketing brochure than serious research. But it’s still hard to read as an endorsement of the old master market. Old masters are ‘best performing’ in the UK market only in the context of relative increase (of 16%). But that’s against a decline of 50% the year before ($438m to $219m). Of course that’s partly driven by decisions about where to sell, but it shows the danger of cherry-picking data.

The report confuses regions and hubs, and is padded out with unsubstantiated claims about the “knowledge-intensive and gender-balanced” jobs that are provided (what is a ‘gender-balanced’ job?). But it does show that the old master market is almost the smallest segment of the fine art market: 45% post-war and contemporary, 30% modern, 12% impressionist and post-impressionist and just 13% old master. So the market post-war and contemporary – just a few generations – is nearly as large as the seven previous centuries. 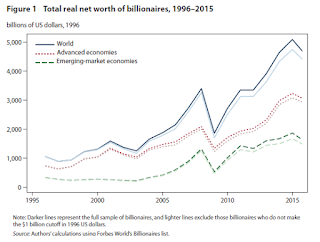 Billionaires' net worth has increased roughly fivefold since 1995. Globalisation has created a vast new upper middle class in developing countries who are able to afford works of art. The boom in contemporary art isn't surprising. The remarkable thing is that so few rich people are spending their wealth on old masters.

It’s not a slight on old masters, or on the people who market them for a living, to say that the market is weak. I see it more as an indictment of the taste of the rich, but we shouldn’t take rich people’s taste too seriously. If you have even a little spare money you can buy pictures that really ought to be out of your league. Enjoy it while it lasts.
Posted by Michael Savage at 09:01 2 comments:

Auction viewings are under-rated. Collectors and dealers go, but the interested public neglects these rare chances to see things that might not be on public display again for a generation. It's not just the museum-quality masterpieces that are worth seeing. Seeing lots of mundane pictures helps develop a feel for relative quality and gives a sense of art history's mountains, as well as the peaks that museums select for us. I started going to viewings as a teenager and I still love them.

Old masters are even more under-rated than auction viewings. It's just inexplicable to me that they are so cheap in a world that's so rich. Whenever a particular picture or auction marginally exceeds expectations there are boosters ready to jump in with stories about market take-off, but in context the market is still in the gutter. You can get an absolute masterpiece for a tenth the cost of a Basquiat, a significant museum-quality picture for a tenth the cost of a central London townhouse, and a pretty good entry-level picture for no more than the price of an annual travelcard in London. Head to Sotheby's and Christie's this week for bargains galore! 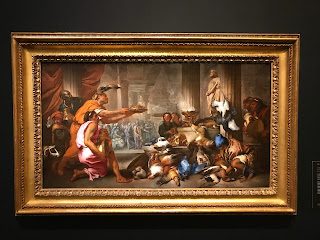 Sotheby's sale is strong, with some splendid Northern portraits that are much to my taste and a beautiful Murillo Ecce Homo (£2m-3m). But my favourites were a couple of Italian baroque pictures. The strong artistic culture of that time maintained extraordinarily high standards, taking for granted the technical achievements of the Renaissance and trying to get ahead in swagger and bombast. There's a wonderful little mythological picture of Bacchus and Ariadne by Francisco Solimena at Sotheby's estimated at just £300k-£400k. It's a virtuoso little showpiece and I love it. But my favourite is Castiglione's Pagan Sacrifice (£400k-£600k), an incredible picture that I've wanted to see in the flesh ever since I came across it in an old catalogue years ago. It didn't disappoint; one his best pictures. Castiglione can be sloppy, but this one is controlled and the colouration is fabulous. 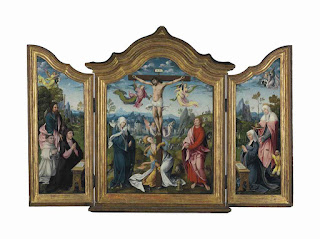 Christie's has got pobably the most significant work of art in André Beauneveu's marble Lions ('estimate on request'), a remarkable rediscovery from the tomb of Charles V. My favourite of their pictures is a triptych by the Master of the Antwerp Adoration (£600k-£800k), a delightfully inventive creation with wonderful monkey-like faces. Dutch pictures are thin on the ground this year, but I liked this superior Jan Steen Boors playing a game of beugelen (£800k-£1.2m). There's a bargain basement still life, too: a flower piece from the studio of Ambrosius Bosschaert I (£80k-£100k). It's fine quality, and if it was just enough better to lose the 'studio' attribution it would be ten times as much.

The drawings viewings are the biggest draw for me. Museums can't keep old master drawings on display, so you have to grab every chance you can to see them. Sotheby's has an exceptional Canaletto. I get a bit jaded by vedute, but this drawing has it all. Well worth the £2.5m-£3.5m estimate. Prices fall away rapidly below the very first rank. There's an intriguing and wonderful  drawing from Rubens's workshop that's been reworked by the man himself estimated at just 1% of the Canaletto, and a beautiful small Poppi St John the Baptist and a young standing man (£20k-£30k). 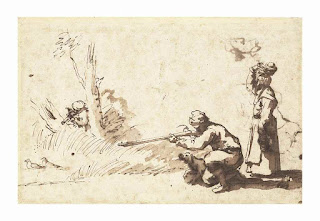 Sometimes estimates don't give you much clue, and old master drawings are especially hard to predict. Christie's has taken a cautious approach. I hate it when the tease me into thinking even I can afford something fabulous. The opening lot, Timoteo Viti's The Massacre of the Innocents is surely in a higher league than its £25k-£35k estimate. A wonderful Ribera, above, is estimated at £80k-£120k. It's interesting to compare to Goya, who would be worth ten to twenty times as much. There's a lot to like in a strong sale, including particularly good English drawings. I loved the well-preserved Romneys. But my absolute favourite is Giuseppe Cades's Portrait of the princes Camillo and Francesco Borghese as young boys (below). The £20k-£30k estimate is no guide to its quality, and possibly not much guide to its value either. 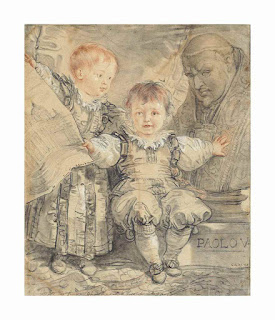 If some things are relatively under-rated, I ought to tell you what I think's over-rated too. I heartily disliked the Frans Hals Two Fisherboys (Christie's, £1m-£1.5m). My first thought was Norman Rockwell. Technical analysis shows that it really is old, and Claus Grimm - whose scholarship I revere - thinks it's right. I think it's an awful picture, even if it's an awful picture by Frans Hals. The estimate is too high for a wrong 'un, but surely far too low for an authentic Hals. We'll see. I don't believe the Christie's 'attributed to Rembrandt', either. It's 'estimate on request', but I thought it a weak picture that doesn't rise above any number of competent portraits in his late style.

Turner's Ehrenbreitstein at Sotheby's is unquestionably 'important' (£15m-£25m), but it leaves me cold. I don't care for Turner's figures, and there are too many here. I can admire it, but can't love it.

I'll say more about the day sales next week when I write up the results, but lots of minor treasures there too. Let me end on a high note, with a masterpiece from the start of the Western artistic tradition. This attic red-figured pelike is attributed to the Carpenter Painter, one of the best painters from the best period of Greek vase painting. It's reconstucted from fragments, but the main painted areas seem to be original. Can you believe it's estimated at just £80k-£120k? 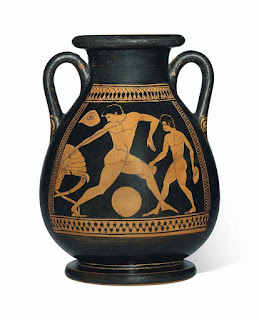 Posted by Michael Savage at 09:53 No comments: