How not to clean pictures: the risk of gels 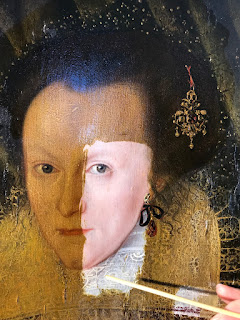 An art dealer has taken down the video nasty of this picture being scrubbed 'clean' with a harsh brush while gel drips across the cleaned area. You can still see it here as of today. The American Institute for Conservation issued a critical statement and conservators were furious. I don't know who was cleaning the picture, but a conservator on social media calls him 'Scrubby Jelly Pants'. The vigorous scraping with a harsh brush is horrifying, and obviously risks damage. We'll never know how much harm was done; working that quickly makes assessment impossible. In the image above the uncleaned eyebrow looks clearer than the cleaned one, despite the varnish. Of course it's possible that it's an effect of light or they were touched up by a later restorer, but the most likely explanation is damage to the original paint. But although the risk of mechanical abrasion is obvious, my concern here is with the relatively new use of gels in conservation.

Gels allow better control of solvents, restricting penetration. Conservators worry that residues could continue to act on painting long after the restoration, but extensive research suggests that the risk is low. My concern is slightly different: it's that new techniques encourage over-confidence. The defence of Scrubby Jelly Pants has been to assert that gels can be tailored to remove only varnish. Bullish conservators have always claimed only to remove varnish; no one wants to say they're removing original paint. But it's just not true. There's always a risk of removing original paint, particularly when it's applied as glazes that might be made of pigment suspended in varnish. Gels are not magic, and cleaning pictures is not an exact science.

Psychologists speculate that we have a 'risk budget', so we respond to new safety measures by taking more risk. Make us wear seatbelts, and we'll drive faster. The other risk is that new techniques are over-sold. There's a mountain of research on the benefits and uses of gels in conservation, but none of it says you can mix a Magic Gel that can be safely slavered over a picture and scrubbed away without risk. One of the main benefits of gels is the controlled application of solvent; in this video it is so thin it runs down the surface. If it were truly the case that the solvent can only dissolve varnish, and not affect underlying paint, it would not be necessary to apply it in a controlled way. The whole point of gels is to mitigate that risk.

The Hippocratic Oath - "first, do no harm" - is not appropriate in conservation. It would mean doing nothing. Old pictures, unlike people, do not heal or regenerate. Over time we can only ever have less of the original artwork. The challenge is to minimise the damage and weigh it against the benefits. Conservation is essential and desirable; a great masterpiece hidden behind dirt and varnish can't be enjoyed by anyone. But the idea of doing irreversible damage to irreplaceable art is horrifying, so the temptation is to deny the trade-off. I recently heard the leader of a major conservation project assert that there was 'no risk' involved. That either misunderstands risk, or mistrusts her audience to understand the trade-off.

Conservation has become highly professionalised and sophisticated. Good conservators use artistic knowledge and skill in the application of advanced scientific techniques that are extensively tested and debated. But their work is not widely appreciated outside the field. There ought to be a better quality debate about the costs and benefits of conservation projects, rather than spin about 'zero risk, all benefit'. The failure to have that debate is part of what creates the space for videos like this to go viral, and for bad conservation techniques to thrive.