A large part of Brian Sewell's private collection was sold at Christie's this week, and it has come in for quite a battering from envious (and often ignorant) critics. The New Statesman even asserts that he didn't own a Hockney. He did, and it's pictured above. Edward Lucie-Smith says it "looks like the drearier sort of fairly competent, totally conservative semi-amateur painting that might just about scrape into an R.A. Summer exhibition today". On the contrary, it's far too good for today's R.A. summer show. It's a beautiful and surprising picture with a marvelous sense of colour; you can't appreciate those subtle pinks in reproduction. It was well bought for just £32,500, which would barely cover the artist resale rights on one of his recent monstrosities.

The sale made over £3.7m. That should impress Lucie-Smith, who seems to think that you judge an art collection by its monetary appreciation, as if it's all about guessing future monied taste. I was more impressed by its personal quality. He wasn't curating a memorial to himself, or playing the market. This is a man who requested a pauper's burial for himself. He bought widely, and supported artists of his own generation like Craxton and Minton who remain cheap, but were often rather good. He had a particular affinity for Eliot Hodgkin's beautiful still lifes, which I adore too. These pictures were bought for Sewell's own enjoyment. They weren't meant to impress other critics, and not all of them impressed me. But there were many lovely 'minor' pictures that were really well chosen: a charming picture of an orange tree, a fabulous picture of a building destroyed in battle, and a striking twentieth century interior, maybe by Malcolm Drummond. 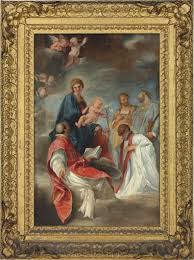 He did have some remarkable masterpieces, too. The fabulous Daniele da Volterra drawing of Dido sold to a museum (the Met?) for £797k against an upper estimate of £150k. My personal favourite was this design by Peruzzi, which I thought cheap at £353k. Two Stomers were unsold. I confess that I didn't care for them. I find him the least satisfying of the Dutch Caravaggists, and a lot of his pictures have been on the market recently. But the superb oil sketch by Andrea Sacchi (above) sold for £233k against an upper estimate of £80k. I'd love it to have gone to the National Gallery.

It was a long sale with quite disparate works, and there were bargains along the way. Some things might have done better in specialist sales. Perhaps this wonderful Mervyn Peake drawing (above) would have sold better in a literature sale. Less than five grand for such an emotive and beautiful drawing by an important writer and illustrator, created at a key moment in World War II seems a steal. But it was a joy to see Brian Sewell's things as a group, and get a new insight into this brilliant critic and connoisseur.
Posted by Michael Savage at 02:39 2 comments: