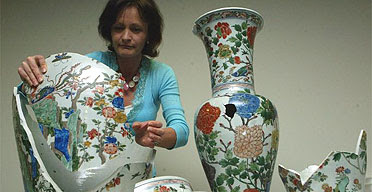 National Gallery director Nicholas Penny knows of ten major accidents to works of art in transit. We know about them only because the Scottish Parliament mistakenly published his submission on the proposal to allow the Burrell Collection to go on tour. It's now been removed, but Phil Miller's report is in the Glasgow Herald. Details are so secret that Penny was willing to describe the incidents only to a single 'trustworthy' individual nominated by the Scottish government.

The official response to Penny's comments is thoughtless. Penny is one of the greatest living art historians and the director of the UK's premier art gallery, but his concerns are brusquely dismissed by Glasgow Life, which runs the Burrell, by asserting that their staff are expert in 'risk assessment'. Worse, they avoid the question of damage in transit by answering a different question - reporting that there have been no claims for damage arising from loans from Glasgow museums. That's a very different thing from no damage.

Lots of small accidents and minor scuffs might not be worth claiming under insurance, but they represent a real diminution of irreplaceable works of art. It is in any case moronic to assert that risks are acceptable because a sample of a few hundred loans has resulted in no major accidents. That's like saying that smoking is safe because you've smoked a few hundred cigarettes without getting cancer. And rejecting Penny's experience of damage is like saying that evidence of other smokers getting cancer is irrelevant because only your own experience counts (after all, they're especially expert in risk assessment).

Anyone who's moved house knows that no matter how much care you take, stuff sometimes gets damaged when you move it. Lots of people have warned of the obvious dangers from constant touring shows - not least Nicholas Penny himself. But it's almost never reported. I spotted a damaged frame at the Wallace Collection that I'm sure would never have been reported if I hadn't seen it. Penny's testimony reveals that significant damage is more common than we realise, and each of those instances represents an irretrievable diminution of human culture.

Penny is an outstanding scholar, connoisseur and museum director who almost always says the right thing. But he is constrained by a zeitgeist that values art only as entertainment or as therapy. He is politically acute and avoids publicity; it was noteworthy that the Leonardo exhibition was fronted by curator Luke Syson, whereas almost every other museum director would seek personal credit. I understand his reticence and respect his methods. But it is utterly contemptible that the museum world's omerta hides the damage done by its incessant parade of exhibitions. They are responsible for protecting the works of art in their care, and they must be held accountable for that responsibility. They cannot be held to account if incidents of damage are kept secret.

This is the most important art story of the year, but so far it's reported only in the Glasgow Herald. Please pass it on!

Thanks to Tiffany Jenkins for the tip, and Phil Miller for breaking the story.
Posted by Michael Savage at 11:50