Over the centuries the greatest old masters have gravitated towards major museums, mostly in big cities.  A famous hold-out is Piero della Francesca; if you want to see Piero, you still have to make the pilgrimage across central Italy.  There's a great book on the Piero trail by John Pope-Hennessy, available in a version including Aldous Huxley's essay on 'The Greatest Painting in the World' (Piero's Resurrection in Sansepolcro).  Apparently a British artillery officer avoided shelling Sansepolcro in World War II because he'd read Huxley's essay.  Last week I made it to Arezzo, Monterchi and Sansepolcro (above), leaving the Pieros in Urbino and Rimini for another trip later this year.
Sansepolcro's old walled centre is well preserved and beautiful.  I stayed at the Palazzo Magi, a lovely old hotel near the Museo Civico that I heartily recommend.  There's some interesting art in local churches, including an important Rosso Fiorentino in San Lorenzo (inexplicably closed when I tried to visit).  The Duomo, just around the corner from the Museo Civico, has a polyptych by Niccolo di Segna and an altarpiece by Perugino.  But the Piero della Francesca towers above the rest. 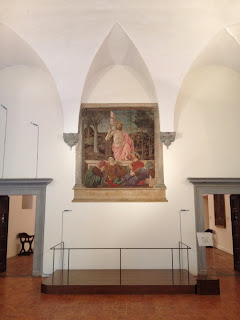 Coming across the Resurrection fresco is a tremendous experience.  It's in a large room in the town hall, now the Museo Civico.  The light is fabulous, from four large windows supplemented with discreet artificial light.  I don't know if it's the greatest painting in the world, but it's up there.  The early Polyptych of the Misericordia was less impressive, partly because many of the panels were undergoing restoration and not on display.  There are also two detached frescoes by Piero.
The rest of the collection is less spectacular, but still worth seeing.  It's interesting to see the polyptych panel by Matteo di Giovanni that originally framed Piero della Francesca's Baptism in London.  There's lots of Sano di Tito, and some detached frescoes in poor condition.  This one is by Antonio d'Anghiari, Piero's master:
Piero is an incomparably greater artist than his rather pedestrian master, but there are some notable similarities, particularly in the eyes.  Here is Piero's fresco of St Julian:﻿﻿﻿﻿﻿﻿﻿﻿﻿﻿﻿﻿﻿﻿﻿﻿﻿﻿﻿﻿﻿﻿﻿﻿﻿﻿﻿﻿
and Antonio di Anghiari's St Sebastian:﻿﻿﻿

I suspect that the difference in appearance is partly because Piero's fresco has been more thoroughly worked-over by restorers rather than because it is better preserved, but the comparison is interesting. 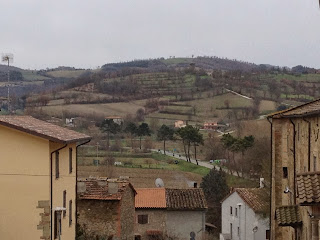 ﻿﻿﻿﻿﻿﻿﻿﻿﻿﻿﻿﻿﻿﻿﻿﻿﻿﻿﻿﻿﻿﻿﻿The Madonna del Parto in Monterchi is a disappointment.  The painting is an absolute wreck,  badly repainted.  It has its own museum, just left of the photo above, where it's kept in a darkened room behind thick glass, alongside three rooms of 'interpretive displays'.  The journey is nice and Monterchi is pretty, but the fresco isn't worth a special trip.
Arezzo is fabulous.  The Legend of the True Cross fresco cycle in San Francesco is one of the most amazing things I've ever seen.  In my opinion, it's the greatest fresco cycle before the Sistine Chapel.  Masaccio's frescoes in the Brancacci Chapel are probably of greater art historical importance, but for me Piero's cycle is a more overwhelming experience.  I won't say more about the fresco itself; there is a huge literature on Piero, and gushing superlatives are boring for writer and reader.  It's an easy day trip from Florence, even if you're not doing the whole Piero trail.
The other frescoes in San Francesco are of more antiquary interest.  There are some quite poor works by students of Piero; it's interesting to see how his style was continued, but he had no direct followers of note.  The earlier frescoes by Spinello Aretino are better.  They were discovered under plaster, so the condition is compromised, but an Annunciation in particular is quite successful. 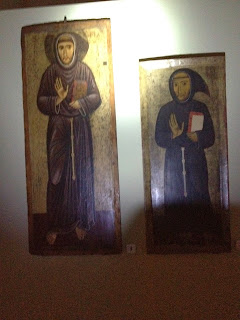 There is lots more in Arezzo.  In Santa Maria della Pieve, a wonderful Romanesque church, there is a Pietro Lorenzetti polyptych on the High Altar.  There is an exquisite fresco of Mary Magdalene by Piero della Francesca in the Cathedral, a Cimabue crucifix in San Domenico, and a remarkable museum that I'd never even heard of, the Museo Nazionale d'Arte Medievale e Moderna.  When I got there the doors were open, but there was no one at the ticket desk, and the lights were off.  I set off through the galleries anyway, using my torch to illuminate the thirteenth century paintings, including two versions of St Dominic, above (apologies for poor illumination from my torch!).  Eventually I came across a guard, who issued a ticket.  It's free, but the bureaucrats have to issue tickets.  I didn't see another visitor in the three hours I was there.  It's a big museum of mixed quality, with lots of second rate stuff.  But there are some great things, including a couple of Signorelli altarpieces, a Pierino da Vinci marble (below) and a Vicenzo Danti terracotta. 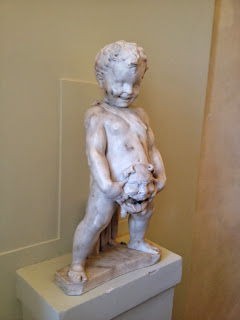 There's a regular train from Florence to Arezzo, taking about an hour.  Sansepolcro and Monterchi are trickier, but there is a bus from Arezzo.  I hired a bike in Florence and cycled, which I recommend as a great way to see the stunning Tuscan countryside, and get a better sense of the challenges involved in renaissance travel.  Happy to provide advice on routes if you email me, and I recommend hiring from the excellent Florence by Bike.

I've been meaning to do this trip for years, and now I wish I'd done it years ago.  It's a fabulous experience - great art, beautiful countryside, unpoiled old towns, quiet museums.
Posted by Michael Savage at 14:27