Vandalism at the Wallace

I returned to the Murillo exhibition at the Wallace Collection this weekend, and found it in a worse state than last time.  A chunk has been snapped off a scroll on the frame of The Rest on the Flight into Egypt (painting above, frame below), on loan from Wrotham Park.  It looked like a new break, and I didn't recall it from my previous visit.  I asked the guard, who told me it had just happened recently, but they weren't sure when.  Other staff I asked said the same thing: "very unfortunate sir, no idea how it happened."  Eventually one guard let the cat out of the bag, and told me that it happened when the director was showing around a group of dignitaries, and 'Lady something or other' broke a piece off the frame.  There is now a flimsy barrier in front of the picture - but only in front of that one picture.

The Wallace is usually very defensive about damage to its collection, which I suspect is commonplace.  On another visit I heard two guards discussing an incident that happened during a wedding that they hosted, but they clammed up when I enquired further.
The Wallace is one of the most fragile of museums, with a profusion of paintings and decorative arts displayed without barriers.  But they take few pains to protect it.  I've seen guards leave the room when large groups of raucous schoolchildren arrive, to avoid the hassle of intervening as they play with the fragile French furniture.  And you often see pushchairs rammed into exhibits, fingers poked against paintings, and sculptures caressed by visitors.  If you cross their palm with silver, you can even host a piss-up in its hallowed halls.  The latest incident speaks again to the privileges accorded to mammon by the Wallace - noble ladies getting special tours where they can poke and prod and smash the exhibits with abandon.  Just compare the 'touching side' with the other side of this gilt bronze to see the tragic consequences: 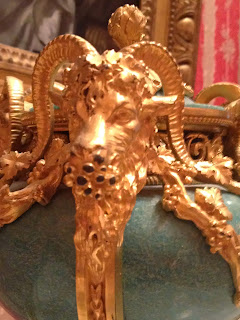 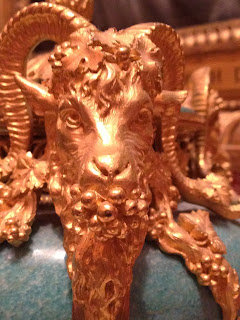 To be fair, I had noticed some improvement recently; visitors have been asked to check large bags in the cloakroom, and guards seem more alert (though my perception is based on a small sample of visits).  Some of the guards at the Wallace are outstanding - not only alert and careful, but helpful and knowledgeable when talking to visitors about the collection.  The Murillo show is lovely, perfect in scale and mood for the Wallace, and far removed from the previous director's scandalous Hirst exhibition, which I decried in a review on Culture Wars.  But this latest incident may cause prospective lenders to pause and consider if the Wallace is fit to be entrusted with loans given its failure to protect the Murillo.