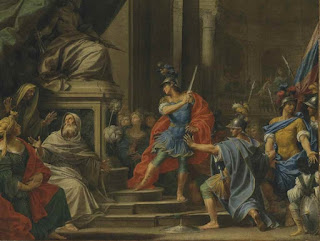 Take a moment to look at the image above. Better still, follow this link and zoom in on the Christie's website. It's not the sort of thing to open a blog post, or put on Instagram. It's not an immediately powerful picture, especially in this dirty and worn state. But it's a real highlight of the Christie's old master sale on Thursday. It's Alexander cutting the Gordian Knot by Donato Creti, a scarce and underrated artist. At first impression it compares unfavourably to Poussin; similar subject matter and composition, but without his scintillating orchestration of colours and dramatic integration of figures by rhyming gestures. Closer up, you see a beauty in the figures and groups that exceeds even Poussin, whose intellectualism could get the better of him. It's not a painting for our times. Its compelling beauty is readily recongnised when we take time to look, but the impact isn't immediate and there's not recognisable stylistic brand.

Good doesn't mean valuable, and just because I think it's under-appreciated doesn't mean it's under-estimated. I really do think it will sell above the enticing estimate of £250k-£350k, but I don't think it will take its rightful place at the pinnacle of the market. This summer's old master sales are especially strong, with some consummate masterpieces. But for me the real reward of viewing is finding hidden gems like this.

This week the picture at the pinnacle is Rubens's Lot and His Daughters , also at Christie's ('estimate on request', was £20m-£30m even before Brexit). It's a magnificent picture, one of the best I've seen in the London salerooms. Do read the excellent catalogue essay, though I was irritated by the bit at the end making it 'relevant' by reference to Gauguin, Francis Bacon and Picasso, which was a bit of a stretch. And what a perversion that the estimate wouldn't get you even a second-rate Francis Bacon!

It's unusual for a portrait where neither artist nor sitter is known to be included in the evening sale, but this (probably) Dutch picture is a worthy exception. Estimate of £100k-£150k is well below what a picture of this quality with a secure attribution would make. It's another picture that's harder to appreciate in reproduction, but it really shone at the viewing. 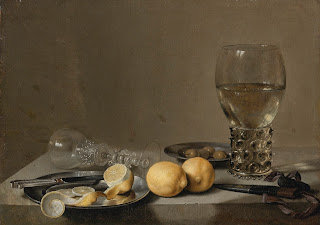 Christie's has the stronger sale this time, but Sotheby's has some fine things. I can get jaded by Dutch still lives, but there are two exceptional ones being sold this week. A large Jan Brueghel the Elder flower still life, recently restituted to Rothschild heirs, is an extraordinary masterpiece of a popular type of early flower still life, larger and better than most (est. £3m-£5m). Good to see in the context of the current small show at the National Gallery, and it surpasses most there. A still life by Pieter Claesz (above, £1.8m-£2.5m) is typical, but utterly brilliant. The play of light is acutely observed. Italian renaissance artists are credited as universal geniuses for their interest in science, whereas the Dutch are often seen as talented painters alone. The Dutch golden age had a more developed division of labour, but urban communities were still small and tightly knit. Surely there would be some crossover between scientists like Van Leeuwenhoek and artists like Claesz. This picture is a fascinating tour de force.

Do have a look at their Jan Steen, an infuriatingly inconsistent artist. This raucous scene is just what we want in a Steen. It's estimated at £120k-£180k, which is about right for a mediocre Steen, but I think this one is better than that. At one point a jug had been painted in to disguise the urinating boy in the foreground! Teutonic portraits are unfashionable unless by Cranach or Holbein, which is the only way I can explain an estimate of just £60k-£80k for this Beham Portrait of Ludwig X, Duke of Bavaria. I also like this cheap Coecke van Aelst, with some studio participation as usual, but beautifully preserved and a bargain at £60k-£80k. Finally this Niccolò di ser Sozzo Crucifixion is a new discovery, and I thought the best of the gold ground pictures being sold this week (£150k-£200k). 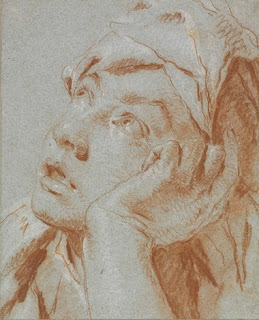 Christie's Old Master Drawings sale includes a stunningly beautiful Giovanni Battista Tiepolo Head of a Boy (above, £200k-£300k). But as always, there are many much more modestly estimated things of real quality. I liked this Sebald Beham Winged Putto (£18k-£25k) and Giulio Romano Roman officer with mounted musicians (£15k-£20k). 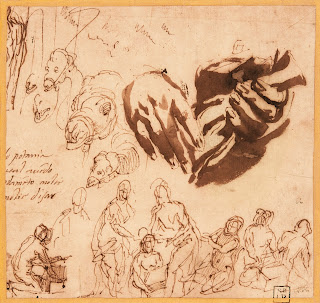 Sotheby's has a strong sale of old master drawings, as usual starting at modest prices.

I particularly like this tiny Veronese (above), which is cheaply estimated at £80k-£120k. Veronese's drawings have always been highly prized, his rapid sketches giving a window to his creativity. The combination of rapid compositional sketches and wash study of hands is particularly attractive in this one. Veronese's drawings have always been ardently collected, but the sale is headed by an artist much less well known as a great draughtsman. This outstanding Lely self-portrait compares with the best of his continental peers and deserves its £600k-£800k estimate. The Veronese is a working sketch whose beauty is accidental, whereas the Lely is a self-conscious manifesto of the artist's genius. Both drawings have rich provenances. The Lely has passed down directly to his descendants; this is the first time it's been sold. The Veronese was owned by Jonathan Richardson senior and Sir Joshua Reynolds, and is now being sold from the last part of the collection of the great connoisseur Paul Oppé, whose British drawings are now at the Tate.

The Oppé section also features a magnificent group of caricatures by Stefano della Bella estimated at around £10k each, and one of the finest Claude landscapes I've seen. Sotheby's also has an album of drawings after paintings in the nineteenth century collection of Dawson Turner, who owned the Bellini now in Birmingham. It's attractive in its own right, but also an important document in the history of collecting. I'd love it to go to a public collection, and it's surely affordable even in these cash-strapped times, at an estimated £7k-£10k.

A final choice is Fragonard's The Inspiration of the Artist. Fragonard was one of the greatest draughtsman, and prolific. His drawings turn up often, but this one is quite exceptional. The perfect rococo subject, and in perfect condition; many are sadly faded, but here you can appreciate the range of tones as he intended. Estimate of £100k-£150k is modest for this. 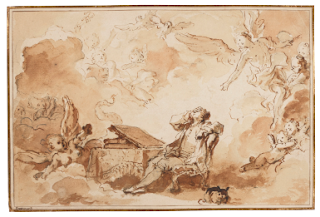 Sotheby's and Christie's both have decorative art sales on view alongside the paintings and drawings sales, and these Italian renaissance cassone at Sotheby's stood out. Once highly prized, many fakes were made and genuine examples are rare. These are particularly fine, and seem incredibly cheap at the estimated £120k-£180k.

Bonham's has some good things, including a fine Claude landscape. Most intriguing was this unattributed St Ambrose of high quality, but estimated at just £10k-£15k. A number of lots at Bonham's carry low estimates to entice bidders; I'm sure this will go much higher.